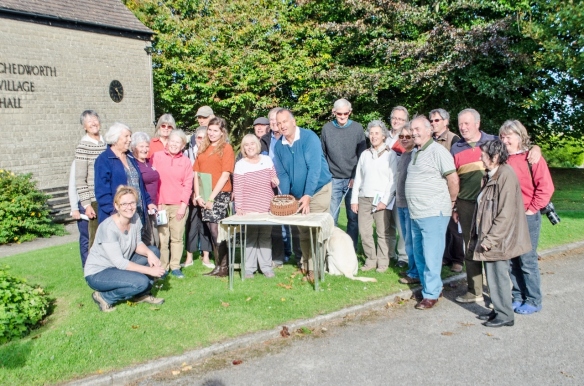 Above: Group photo with the 20th anniversary cake at the Chedworth Forum on 23rd September. Below right: Jon Stokes enthuses about a pollarded Ash 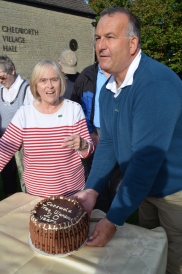 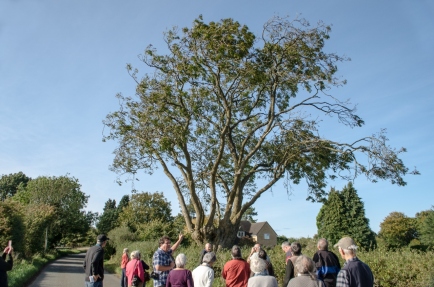 When we pointed out to Jon Stokes at the Tree Council that 2017 would see the 20th anniversary of the Cotswold Tree Warden Group, he was quick to suggest that there would be a way to mark it in the calendar of events.

The Tree Council were busy setting up their annual round of regional forums at different venues and the programme for any year tends to have a common theme on which to address each gathering, plus an individual item, based on the locality, such as a property to visit or local speaker.

It was then decided that the 2017 round of events should commence with one extra meeting hosted by us. We eventually settled on a return to the Village Hall at Chedworth, which we knew had the appropriate facilities and a date of Saturday 23rd September was chosen.

It was a busy morning of presentations, with a new Tree Council employee, Kristina Jansons-Binns addressing us on ‘The Value Of Trees’. With the imminent launch of The Tree Charter in November, this was an opportunity to consider the different ways in which trees may be valued – in monetary terms, environmental benefit, value to society or the individual. There appeared to be a general view afterwards that it was difficult for the average local tree warden to embrace and apply the ideas involved.

However, it was easier to take on board the message from Jessica Goodenough, of The Open University regarding Treezilla. This is a project to create a ‘monster map’, the ambition being to record all the trees of Britain and to show how the trees near us benefit our local environment. With such ambition, it will necessarily involve local input and the idea is for any of us to get on board by logging details not only of the location of trees, but also further information about them.

Our local presenter for the event was Dr Ian Grange of the Royal Agricultural University. The common element for the morning of valuing trees was represented here by Ian focusing on work he has undertaken specifically relating to hedges.   Reflecting on the trend for bigger fields with the resulting loss of traditional hedgerows, he ‘spreads the word’ on the importance of hedgerows, also orchards and other trees in terms of their carbon uptake and the fight against global warming. Many of us were familiar with the benefits of hedgerows for wildlife, but more of us are starting to appreciate this other key aspect. 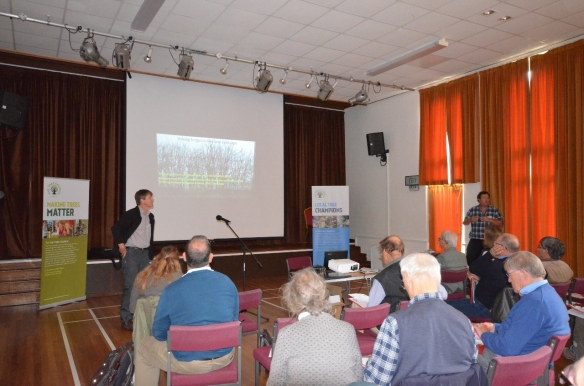 Dr Ian Grange is introduced for his presentation to the delegates

With all of the foregoing – and a very good lunch to fit in – there was limited time for outdoor exploration. Nevertheless, we still managed two topics. Jon Stokes challenged us with a theoretical problem in the grounds of the hall. The imagined situation was that planning permission had been granted to redevelop the area and that we had the opportunity to save one tree out of those around us. The resulting discussions and explanations showed how we all can view the same trees and landscape in different ways and for varying reasons. It also demonstrated the need for teamwork and co-operation.

Considering the options in deciding “which tree to save”

There was still time to walk across the adjacent playing and down the lane. Jon was impressed by the growth shown by the hedge planted along with the local community six years earlier (Tree and Leaf, Spring 2011 edition). He demonstrated evidence of Ash dieback and admired a large and healthy looking pollarded Ash. There can be so much to see within a small area if you know what to look for!

Then it was back to the hall for group photos with a celebratory cake, kindly provided by Jean Nunn, before its demolition with tea and departure to various points of the compass.