The weather was kind to those who gathered at Barton House Orchard on 2nd March 2017 for fruit tree pruning guidance under the expert tuition of Dave Kaspar. It was the first course attended by most and following Dave’s indoor introduction we headed out into the orchard – and sunshine, which was very welcome so early in the season.

Dave started off by guiding us through basic pruning ‘rules’ using specially selected offcuts to represent young trees at different stages – you need to have the basics before you start on more mature trees.  This includes safety, correct use of equipment and of course understanding the development and growth of trees. 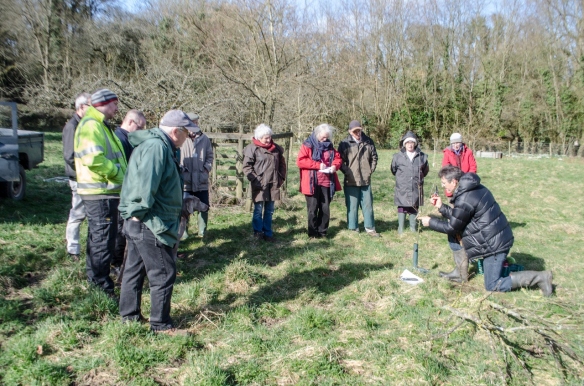 After a lunch break we set about looking at selected mature apple trees in the orchard.  Though the principles of our learning apply to other fruit trees including plums, of which there are a few here, it is not the right time of year for their pruning.  Dave had marked a few trees with suggested pruning spots marked and invited everyone to get some practice.  It was surprising how a few choice removals – opening them up, taking out crossing branches and less healthy ones – could improve the look of the trees.  It will also give them chance to put their efforts into producing fresh growth and of course, a better crop of apples.  We were also asked to consider further pruning which could be of benefit.  This can include limiting the height of the trees growth to make it easier to deal with and gather apples from.

We then moved on to take a look at one of the trees pruned in previous years.  This had been prompted into putting on plenty of fresh growth, including many “watershoots”.  These can be trimmed part back, again to encourage growth and keep accessible.

There was time to take a look at the prospects for an apple tree which had recently been split down its trunk by recent bad weather.  Whilst badly affected, it was not completely broken off and has a chance of surviving and redirecting some of its vigour.  At worst, it is of course a useful habitat for various creatures.

As the day drew towards its end, there was chance of a quick guide to grafting.  Using rootstock which Dave had brought with him, he grafted on a scion cut from another apple which had blown down the previous winter, impressing everyone with the procedure which has been used in years past to grow all the trees in the orchard and the millions of others elsewhere.

We went indoors for scones and tea/coffee generously provided by our hosts, Frank and Marilyn Gardner before departing, well satisfied by our day’s efforts.