This year we planned two May Walks  – one based in the north of the Cotswold district area and one in the south.  Inclement weather led us to postpone the north version – though it did take place in July

For our southern excursion we gathered on the evening of 30th May outside the village hall at Sapperton.  We were met by our guide (and CTWG committee member) Keith Mills.  As forester for the Bathurst Estate, Keith has many years experience of the woodland in and around there.

Our walk was to take us down past the church to a footpath leading to the side of the River Frome and along by the derelict remains of the corn mills of Dorval (the spelling appears to changed from time to time between Dorval and Dorvel) and Henwood.  From there we were to explore the slopes of Hen Wood, of which, more later.

On leaving to tarmac of the road beyond the church we soon found ourselves passing Upper Dorval House built and lived in by Ernest Barnsley, the Arts and Crafts builder and furniture maker. 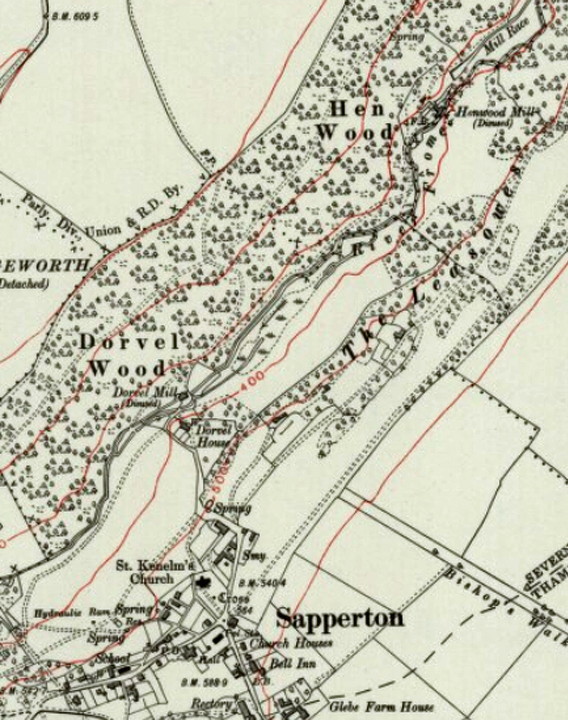 Crossing the river we soon came, amongst the undergrowth and natural regeneration, to the ruins of Dorval Mill.  It would have been easy, without Keith’s accompaniment, to have passed by without recognising what had once stood here.  The river after all at this time of the year was insignificant. One would not have anticipated its capacity to power a working mill.  Clearly the River Frome does not contain anything like the volume it must have had back in the 1700s when mills were first constructed on this stretch of water. There are however one or two rows of stone blocks, a corner or two and then peering into the grass and shrub covered ruins you can see the side of what had been part of the mill race or the leat. 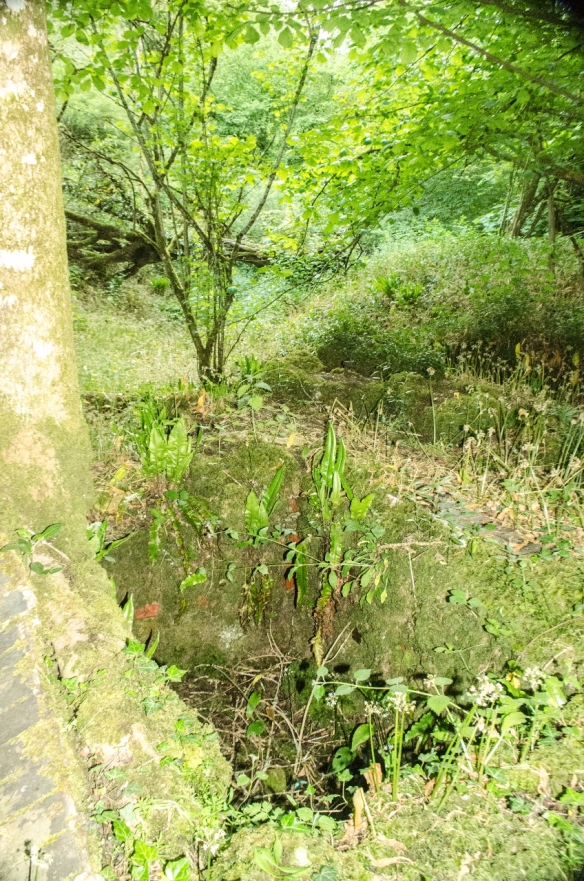 Moving on, we twisted and turned through the myriad trees, saplings, shrubs and underground.  Surely in times these mills were working the path must have been better defined?  Looking back now on a map, the distance seems a modest one, but the awkward terrain on a May evening made it seem rather more.  Arriving by the site of Henwood Mill, we then struck upwards, a steepish slope with not only trees and understorey to contend with but also running water.

When we made it to an opening on rather flatter ground, Keith explained the reason for our odd-seeming route.  We were actually on the route taken by a spring [marked ‘Spring’ near the top right of the map] heading down to the river and it was here that we came upon a “table” of tufa.  This is formed when water, in this case the spring, has dissolved rock which is rich in calcium carbonate.  Once the spring water emerges into the open, interaction with the air results in a loss of carbon dioxide, with calcium carbonate being deposited on the course of its flow.  This attaches itself to the ground helped by the various plant life it reaches. Keith explained that, having known this area since the early 1980s, the area of tufa had expanded considerably.  Probably as a result of the deposits the stream now flows downwards finding a route where it can so that it resembles less what we might think of as a single stream than a small delta.  I should prefer not to scale it after heavy rain!

The tufa is attractive to many plants, which can be found, not only here but at other sites where tufa occurs.  I was not familiar with the term bryophytes, but this covers the families of mosses and worts.  There are however many other plants which can be found here because of the tufa.

A further climb took us up and round past the vertical rock formation from the spring emerges until we reached the easy walking of the path along the ridge which could take us back to Sapperton.

We certainly got our exercise and explored nature on this interesting walk.